Originated in India, Teen Patti is a popular gambling card game. It is famous not only in India but all over South Asia. A simplified variant of this game is also well known as 'flash' or 'flush.'

The British card game, 3 Card Brag, is said to be the original idea from which Teen Patti was influenced since both the games have many similarities. Teen Patti is widely enjoyed by people of India during festivals or social gatherings due to its deep connection with the culture.

What makes people love this game is the desi feeling that it gives off, although it is a western game. In fact, it is played by people of all age groups among family or friends alike. It is well known in every household of India. 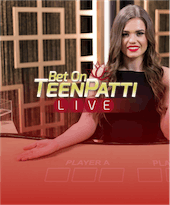 How to play Teenpatti

The Teenpatti game, meaning ‘three cards’ in English, is a card game originating from the Indian subcontinent and is popular throughout South Asia. The game has similarities to the English game of three-card brag, taking its influences from Poker.
Teen Patti requires 3 to 6 players. A 52-card pack is used, excluding the jokers. Since it's a gambling card game, the first thing to be done is placing a bet, just like rummy or poker games. Usually, this first bet has to be of a fixed amount. This fixed amount can be pre-decided as per the player's will. Each player has to place this fixed amount as a wager. Once the bets are collected, three cards with their face down are dealt to each player. The minimum amount of cash at stake is called the boot amount. This amount is collected in a pot, which is placed in the middle of the table. There are different types of Teen Patti variations like Banko, Auction, Muflis, Joker, AK47, and many more.

Read on to learn how to play the Teen Patti game!

Teenpatti isn’t an online Live game that’s hard to understand, the rules are very simple. As mentioned before, the only cards participating in each round are your 3 cards and the dealer's 3 cards. For the dealer to qualify, the dealer must have a Queen or higher as one of the three cards dealt.

In order to join the game, you’ll need to place your initial bet (‘ante’). Once the betting time is closed, you’ll get 3 cards and the dealer’s cards stay closed (you can’t see them). Based on your cards you can choose if you want to 'play'. In other words, do you think you can beat the dealer with the 3 cards that you got dealt?

If so, you can 'play' which is 1x your ‘ante’ bet. After this, the dealer’s cards will turn around and whoever has the better hand, wins.

Three consecutive cards of the same suit are called a straight flush. The best straight flush would be A-2-3, while the weakest is 4-3-2.

It is also called a trio. Three cards of the same ranking of different suits form a trio. A's make the strongest trio, and 2s make the weakest hand.

Also called the normal run, it is three consecutive cards of different suits. The strongest and weakest hands are the same as in the straight flush.

Also called color, it is three consecutive cards of the same suit, not necessarily in order.

If a hand has two cards of the same rank, it is called a pair.

When none of the above are present in hand, the only deciding factor is the highest-ranking card. Whichever player has the higher card, he/she wins.

The rules of the game are usually the same. Online versions have many benefits when playing with real money, as there is often less pressure to spend a lot of money on the game. You may choose from various tables, starting from smaller bets to the ones for high-rollers, and playing can be done at the ease of your home. Online casinos often provide different variations of Teen Patti, and so you can try your luck and skills in different variations of the game.

Before taking a closer look at the Teenpatti Bet Options, we would like to highlight that when you play Teenpatti at Casumo, all players will have the option to bet on two side bets, pair or better, and 3 + 3 side bets. This offers more betting opportunities and some added excitement to every game round, of course.

Ante - In order to join the game, you’ll need to place an initial bet, this is called ‘ante’. Place a bet by selecting a chip value from the available chips and click on the bet option on the table before the timer runs out.
Flush - All 3 cards are of the same suit. If two players both have Flushes, the player with the highest card wins. If they match, then the next highest card is compared, then the third card if needed. If two players have the exact same card values, the hands are ranked by suit, with spades first and clubs last.
Mini Royal - Queen - King - Ace of the same suit in your own 3 card hand.
Pair - Two cards of the same rank. Between two pairs, the one with the higher value is the winner. If the pairs are of equal value, the value of the third card decides the winner.
Play - After the ‘ante’, the joining of the game, the regular betting starts.
Straight Flush - Three consecutive cards of the same suit.
Straight - Three consecutive cards not all of the same suit. A Straight is also referred to as a ‘Round’ or a ‘Sequence’.
Three of a Kind - Three of the same card. Three Aces are the highest and three twos are the lowest trio.

How to start playing Teenpatti at Casumo

What is the Difference between Ante Bets and Play Bets in the Teen Patti game?

Is playing Live Dealer Teen Patti the same as playing at a land-based casino?

Can I ask for a sideshow from any player playing the hand?

What are the best hands in Teen Patti?

Can we choose a joker in Teen Patti?