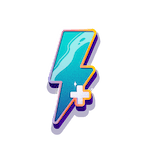 Lightning Roulette Extreme is a live casino game based on European roulette. The wheel includes the numbers 1-36 and a single 0. Each number is either red or black, except for the green zero. The numbers on the wheel each have a pocket inside which the roulette ball, also known as a pill, can land. If the pill lands where you bet that it would, you get a payout according to the odds of your wager. Live roulette is streamed directly with a host spinning the wheel and calling out the results in real time.

So far, so standard? But hold on, because lightning is about to strike! After betting closes, the live host pulls on a lever to generate one to five Lightning Numbers with random Lightning Multipliers (of 50x - 500x), initiating an electrical storm of sorts, with the lucky numbers on the betting grid lighting up with bolts of lightning. If you’ve bet on one of these Lightning Numbers, then your winnings will be super-charged with the assigned multiplier if the roulette ball lands on them.

So, what’s been added to this new edition that makes it stand out? Two features: Chain Lightning and Double Strikes. In each round of Lightning Roulette XXXtreme, there’s a chance Chain Lightning will strike, hitting several sequential numbers, up to 10 bet spots per round, with some extra multiplier thunder.

They say lightning doesn’t strike twice in the same place, but that’s only because they haven’t played Lightning Roulette XXXtreme. In this game, a random round of Double Strikes can increase multipliers by 600x - 2000x.

Lightning Roulette XXXtreme is hosted live in the Evolution Game studios, where a black and red background and plenty of sizzling bolts of lightning make it clear that you’re not in for just any roulette game. The Xs on the roulette wheel podium let you know that you’re playing an XXXtreme version.
Click on the betting grid to lay bets and keep track of where the gold Lightning Numbers landed with the corresponding multipliers clearly marked. The XXXtreme features Chain Lighting and Double Strikes are lit up in red. Use the racetrack to make neighbour bets on a set of numbers and choose how many in a row to select. You can also check the most recent winning numbers and save up to 15 of your favourite bets for next time.

Check out Lightning Roulette Extreme at Casumo, the newest version of the world’s most popular live casino game!