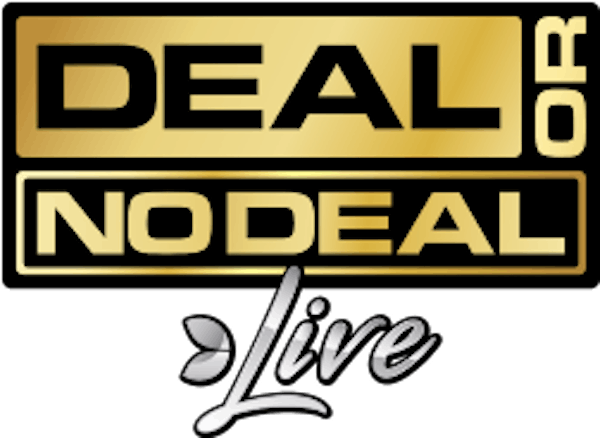 Deal or No Deal

Live Deal or No Deal is one of Evolution Gaming’s most popular game shows. It’s a live title that will take you to the heart of the action, put you centre stage, and let you decide whether to take the banker’s offer or risk it all for potentially higher prizes.

Live Deal or No Deal: How to Play

Live Deal or No Deal is a presenter-led game developed by Evolution Gaming. It’s based on the original Channel 4 TV game show of the same name and offers unique player engagement. It can take a few minutes to familiarise yourself with this title, so keep reading and find out how to play before staking real money at Casumo.

The aim of the game is to correctly estimate the right time to cash out of the game, earning the most significant prizes. With online Live Deal or No Deal, a round is made up of three parts:

You’ll need to lay bets in the first two parts, with the outcomes generated by a random number generator. The higher your bet, the higher the contents of the boxes will be.

The final round is played with a live dealer hosting, and this is where you can win potential prizes up to 500x your stake, that's if you make it through to the final round with the largest briefcases still in play.

Rounds: Qualifying, Money Up and Deal or No Deal rounds.

Deal or No Deal Live Instructions

It takes a few rounds to get to grips with playing Deal or No Deal live. It’s fast-paced, with three parts to each game, making it seem more complex for new players.

Here’s how to play and win.

Pass the Qualification Round

Begin by selecting one of sixteen briefcases; this will be the high-value box in the game round. Then place a bet and spin the three-reel bank vault. You’ll qualify for the next step if you manage to line up the gold segments in all three segments of the bank vault.

Consider your initial bet carefully, as it corresponds to the amount placed in each of the 16 boxes. The higher the bet, the more that’s added.

You can increase your chances of qualifying by staking more using the Easy Mode (costing 3x your bet and locking one of the gold vault positions in place) or Very Easy Mode (locking two positions at the cost of 9x your bet).

Top up the Cash

Once you’ve qualified, you get the chance to up the ante by increasing your bet and topping up the cases by 5x-50x.

To start, bet, select a box and spin the top-up wheel for the multiplier. You’re under the pressure of a time limit, and it’s up to you which briefcases and how many you top up.

Play the Deal or No Deal Round

The round opens on the live host and your 16 sealed briefcases. With each round, the excitement and anticipation build as cases are opened, and the banker offers you a cash deal in exchange for what might be contained in the last remaining briefcase.

As the contestant, you can see the contents of the boxes on-screen, but with each round, different briefcases are randomly eliminated. You’re trying to win the most, whether this means playing till the end (if largest sums remain) or taking an offer and cashing out early.

If you play through to the final round (that’s making it through the four preceding briefcase rounds), you´ll be left with the banker’s final offer or the payout from one of the two remaining briefcases.

Turn down the offer, and a singular case is opened, revealing which of the two remaining amounts you’ve won.

When you enter the game, you´ll find all of the controls running along the bottom of the screen. Use the plus and minus buttons to increase or decrease your bet and click spin when you’re ready to play.

When the dealer offers you a cash out during the main round, you’ll have to select No Deal within the time limit shown to continue playing. The rules can be found by clicking the + icon, and the live chat is in the top left corner of the screen.

Does Evolution Gaming’s Live Deal or No Deal Have a Jackpot?

The max payout is 500x your bet. Before playing Deal or No Deal, make sure you’re prepared, especially if betting large amounts.

The game takes nerves of steel, and at the end of the day, if you play till the end and there’s a hefty sum left up for grabs, the final round is like flipping a coin; it’s got equal odds of ending well or with pennies.

Why Should You Play Live Deal or No Deal?

Details About the Game and Developer

Deal or No Deal is one of Evolution Gaming’s most popular live game show titles. Released in 2019, it’s based on the hit Channel 4 TV program and was created in partnership with Endemol Shine. Evolution Gaming is the leader of the live casino industry and technology, so make a top playing choice. You can find their games offered in the Casumo live casino lobby.