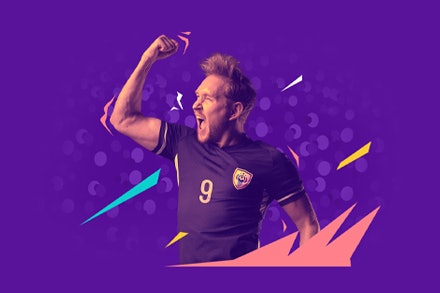 All packed in our UK sportsbook

The simple way to bet on your favourite sport.

Tweak it to own it

Easily customise the Casumo Sportsbook to see only the sports you're interested in. Choose your favourite sports or leagues and drop the rest. Tweak anytime!

Catch all the action in real time with Live mode. Click a button to see all matches or events in play, organized according to your favourite sports and leagues.

Build your own bet

Ready for the big match? We are. Build an Acca on a single game with our sportsbook’s brilliantly simple bet builder tool.

Winning since 2012
A decade online, a dozen trophies in the cabinet. Nuff said.
About Casumo

Superfast transactions: you won it, you want it, you got it. We'll review and process withdrawals within a matter of hours.

Our secure payment methods are second to none, keeping your sensitive information safe.

That's right, we don't charge anything for any withdrawals over £10.

Don’t worry, be Appy
Get our free app, filled with fantabulous features for the best Casumo experience.

Every four years, football’s crème de la crème represent their nation in a month-long battle to become world champions. After the dramatic qualifier and play-off rounds, 32 teams make it to the final tournament, where their group stage matches will determine their fate.

Whether you’re a newbie to sports betting or consider yourself a veteran, the World Cup brings a plethora of bets for players to choose from, including a number of proposition bets to really get into the World Cup spirit.

The giants of international football are always going to make their mark on World Cup odds and even though France are world Champions, they are still second favourites to win back-to-back World cups. France finished top of the table in Group D and they are unbeaten in their last 17 games - discounting the loss they suffered to Switzerland on penalties.

Currently, Brazil are the favourites with odds priced at at 9/2 to lift the trophy and claim their sixth World Cup title. The bet is each way with terms 1-2, which simply means that you’ll be betting on Brazil to finish first or second.

Brazil have not been on their usual scoring form, with 80% of their games ending in under 2.5 goals. However, their form has been excellent, winning 7, drawing 2 and suffering only one defeat in their World Cup qualification campaign.

The current world champions, France, have World Cup winner odds set at 7/1 and if they carry their current form onto the final tournament, an outright bet on Les Bleus will be worth considering.

You’re able to place World Cup winner bets with Casumo before and also when the World Cup is under way.

Can England finally bring the most prestigious football tournament home? From the 10 matches played in 2021, England won eight and drew two while keeping seven clean sheets. Still unsure whether to back England? With 39 goals scored, England finished with the most goals scored and their over 2.5 goals percentage stands at 70%. It barely drops (67%) when playing on the road. England only conceded three goals in their World cup qualifying campaign and the both teams to score percentage stands at 40%.

Gareth Southgate has a solid squad and great talent to choose from but that will all depend on the next couple of months. All England betting fans will be hoping that none of their star players will be plagued by injuries, as this has the potential to change the England World Cup winner odds.

Getting the know-how on odds work is critical in sports betting in order for you to make the right decisions and hopefully placing a winning bet. We have therefore put together a thorough betting guide to help you grasp the basics that you need to get started with sports betting at Casumo.

Odds can appear in two different formats: decimal odds or fractional odds and before we go any further, we’ll delve deeper into the differences between the two.

Pick the odds format you’re most comfortable with. Most UK sports betting enthusiasts  will prefer fractional odds, while decimal odds are more popular in continental Europe and Canada, amongst other locations.

Converting fractional to decimal odds is pretty simple. For example, odds of 5/7 can be converted to decimal by adding both numbers together (5+7=12), then divide the total by 7. In this case, 5/7 odds would give us decimal odds of 1.71.

However, there’s an easier way!

On Casumo.com you can change what odds you wish to see in your settings menu. To do so follow these steps:

Click or tap the My Bets icon on the top right of the screen.

You will see Odds format and a two-tiered menu. Select between Decimal or Fractional.

Fractional odds are shown with a slash (/) dividing the numbers or in some cases a hyphen (-) and the maths behind them is pretty simple. Let’s break the explanation down to an easy example:

Let’s break it down to an outright bet on who will win the Premier League. The odds in this example are as follows:

Manchester City, having the shortest odds, are the favorites to win the title. Your £10 stake on them gives you a potential payout of £20.50.

A tenner on Liverpool will give you £28.50, while the same stake on Manchester United will return £90.

Decimal odds are very straightforward to understand and have been the preferred format of choice for sports punters outside of the UK.

The following is an example of how decimal odds work:

To get to your potential payout using decimal odds, simply multiply your stake by the odds. The lower the odds, the higher the probability that the bet will come through. In the example above, Manchester City are most likely to win the league based on the odds.

Whether betting on the Premier League or betting on tennis, it’s paramount that you research what you’re betting on. The probability of winning is calculated by odds traders, who  are constantly looking at the dynamics of all sports to keep odds accurate. All odds are subject to change and when you bet on games early, the odds might be very different from moments before kick-off. This is because of occurrences that influence the odds trade, such as player injuries.

In 2016 the football world was shocked as Leicester City managed to win the title despite starting the season as favourites for the drop. At the start of the season, they were listed as 5000/1 to win the league. That is an extremely low probability. As the season drew on, their odds of winning shortened, so bettors who got in early on that deal made the best return.