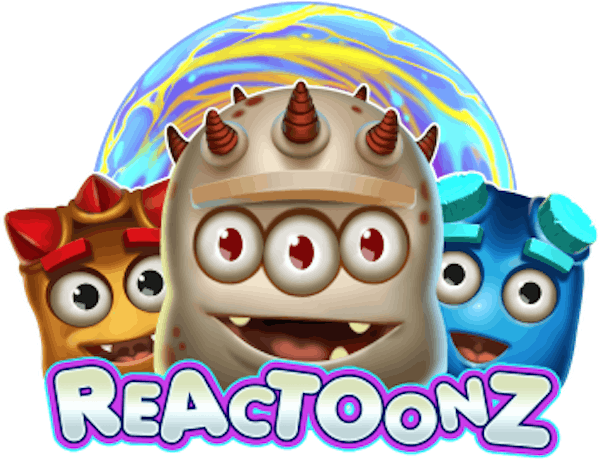 Reactoonz has multiple symbols and features for players to get familiar with. The lower-paying monsters in this game will land you anything from 0.1 times your bet to 10 times your bet, depending on if you get from 5 to 15 (or more) in a cluster. While 5 of the higher paying symbols in a cluster can land you from 0.5 to 1 times bet, 15 or more can go up to a 150 to 750 times bet. In addition to these emblems, Reactoonz also features a handful of extra special symbols which include the Wild and Special Wild.

Reactoonz has plenty of special features for players to explore. Take for instance the Quantum Leap charge meter feature. When a meter is fully charged, a random quantum feature is then activated. This could either be Implosion (transforms 3 to 6 symbols into wild symbols, while also destroying all adjacent symbols), Alteration (chooses 1 random one-eyed symbol, and all matching symbols turn into another symbol), Demolition (destroys all one-eyed symbols and all matching symbols) or Incision (cuts a wild symbol into the centre and creates two intersecting diagonal lines through the grid).

Does Reactoonz have a jackpot feature?

Coupled with an assortment of unique symbols and features, Reactoonz gives all players the best possible chances. With regard to limits, players can bet a minimum of 0.20 and a maximum of 100.

With the Casumo Online Casino app, you have the possibility to play Reactoonz on the go. You can play on both iOS and Android devices, making the slot game easily accessible.

Reactoonz boasts a nice aesthetic coupled with interesting gameplay. Simple yet dynamic by design, this first-class video slot is suited for players of all skill levels. So, if you like playing a slot game that is full of character, then Reactoonz is the one for you.

The aliens are featured on the reels are called Gargantoon. One of the aliens Gargantuan will stay on the top right of the reels and will only appear as a Wild once he is commanded.

Upon these reels, there is indeed a standard Wild, made up with one symbol, but more on that later. Gargantoon's eight distinct alien army consists of 8 particular aliens, with the four two-eyed icons and four one-eyed icons representing high-value symbols and lesser icons, respectively.

On the seven-reel video slot seven-row generates a cluster with at least 5 different matching symbols to start winning combinations payouts; that's how the aliens' creation of life in Reactoonz works. Because of the cascading reels, the leading symbols would explode with each winning spin, making space for new icons to emerge.

You'll get Giantoonz if you land 4 fitting signs on a square, which will double your winnings if they're representative of a successful combination. After the blast, one unknown one-eyed icon is illuminated as a varying symbol. Unless that symbol creates a jackpot, two Wild symbols are left on the spools.

The Pink Alien is the sign with the most potential. If you have fifteen or even more of them in a row, you'll win 750 times your stake. It's possible to place several large payouts in a single spin, thanks to cascading wins. Gargantuan and his alien army have a potential payoff of 4,750 double the activating bet, which is just enough to pursue them.

Details about the game

Play N' Go is an app developer that doesn't have to introduce itself anymore. Reactoonz, a high variance 3D slot, is the latest addition to their slots library. This alien-themed video slot is operated on a 7x7 grid.

Reactoonz is a 3D slots game played for as little as 0.20 each spin with as much as 100 each spin on PCs and handheld devices. As you rack up wins, symbols accumulate that can be used to activate one of five bonus modes. The bonus games are Alteration, Implosion, Demolition, Gargantoon, and Incision. In each of the special effects, wilds are now either hurt or attached towards the reels.

Not only that, but three different bonus features were added for variation:

One among five Quantum features can be activated at random with each wild symbol transformation as you charge up the meters. Limited symbol utter destruction, intersecting wilds, and a Gargantoon (tons of wilds) that adds 11, 22, and 33 wilds beef up the action. Additionally, the symbols that convert provide random wilds and characters that give 2x wins when four matching symbols are found.

The non-progressive grand prize of 4,700x the stake is the biggest cash prize that can be earned on a cascade. Four strong aliens, four low-paying aliens, and even the vortex wild all appear on the reels. The pink alien is the sign that holds the highest cash prize; five of them in the maximum gamble earn 750x your line bet.

The Max Bet icon, graphics, and audio settings make gameplay more convenient. Reactoonz is a dynamic slot, so it takes just a few spins to activate the bonus features.