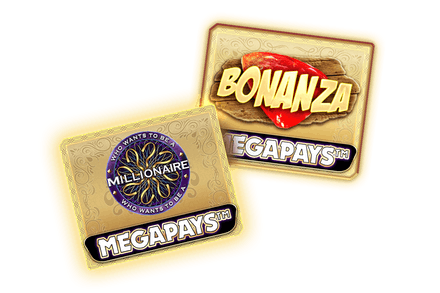 With 4 jackpots that can drop on any spin

Check out the Big Time Gaming slots that have gotten a Megapays makeover, now featuring FOUR JACKPOTS each:

Bonanza MegaPays
Mine for diamonds and other precious gems until, on any random spin, one of the low-value symbols triggers the Megapays feature with the potential to drop one of four progressive jackpots.
Who Wants to Be a Millionaire MegaPays
Based on the classic TV show, now that it features the Megapays mechanic, it might just live up to its name by offering four jackpots: mini, midi, major & mega.

What Bonanza Megapays is all about

Bonanza Megapays is Big Time Gaming's sequel to the hugely successful, and absolute banger of a mining-themed slot, Bonanza Megaways. The Megapays series takes BTG's most popular Megaways games and adds a big progressive jackpot and a new Megapays feature. The original game was already a favourite of slot fans at Casumo and elsewhere. Now, they've given you even more ways to win. This high-variance game comes with jackpots as explosive as a stick of dynamite. If you liked the original Bonanza Megaways, this sequel keeps the same mile-a-minute gameplay. Plus, some seriously cool extra features. Boom!

What Millionaire Megapays is all about

That tense music. Those very 2000s graphics. If you liked the show, you'll definitely enjoy the Who Wants to be a Millionaire Megapays progressive jackpot slot. If you've never seen Who Wants to be a Millionaire, are you old enough to be here? Indeed, it really was one of the biggest TV shows ever after it launched in 1998. TV producers in over 160 countries have licensed the format since then. Big Time Gaming turned it into a slot, and now this updated sequel — which you can of course play at Casumo. This title uses Big Time Gaming's Megapays mechanic. That means six reels and 117,649 ways to win. It also has a four-tiered progressive jackpot, making it the first Who Wants to be a Millionaire slot to live up to its name.