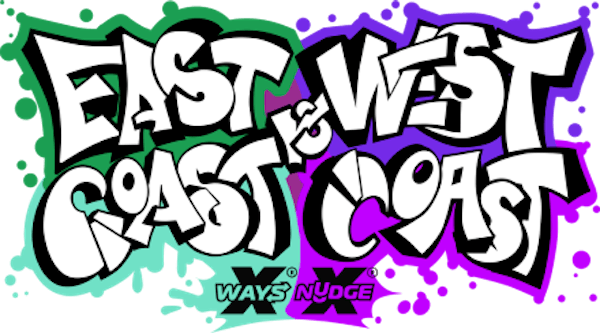 East Coast vs West Coast slot from NoLimit City takes on the 1990s in this retro game. The entire theme centres around rap battles during this time and adds in some pretty impressive bonus features as well. The slot itself is a 5 reel game, with 243 ways to win. However, thanks to some exciting Enhancer Features, this can actually go up to a massive 84,375 ways to win. Betting on this slot is easy, perfect for a range of bettors thanks to its 20p to £100 bet range. The slot also has an RTP of 96.04% and an impressive hit rate. On top of that, this slot has very high volatility, so big wins don't come around that often. However, when they do, this can be as much as 30,618x the initial stake.

What East Coast vs West Coast is all about

East Coast vs West Coast slot is filled with a graffiti-style background and symbols. In keeping with the rap rivalry of the two coasts, the background is part Californian beach and part NY city. And the soundtrack matches this containing heavy beats and the occasional siren. The low paying icons are graffit-styled Ace to 10. Higher value icons include a ghetto blaster, dog, dollar bills and more. The highest of these is the dollar bill with Franlin on it, paying out 7.5x the initial stake with a match of five. A gold ring is the wild and there are various scatters to trigger the different bonus spins features that are available in this game. Finally, the slot is compatible with a range of devices, playable on the go or from the comfort of home.

There are a ton of features to be found in East Coast vs West Coast. The first of these are the Enhancer Features. To kick this off, any of the three bonus spins features must be activated. When any of these are in play, then these features are triggered: X-ways feature where X-ways icons will spin to turn into the 2/3 matching symbols. The reel height expands pushing the ways to win to a higher number for more possible combos. The X-Nudge option adds a wild that can move vertically in both directions to cover the whole reel. The Enhancer Multipliers will increase. Linked Reels sync a minimum of two reels to show the same symbol combinations. Finally, the Infectious X-Ways feature makes one symbol infections to help make more wins on the reels.

The Drive By Respins feature is activated when 2 bonus scatters land on the reels. It awards one respin with an Enhancer feature is active. The East Coast Spins activate when three or four bonus icons land on the reels. This awards 8 to 10 bonus spins. The Infections X-Way icon is guaranteed for each free spin. Above the reels is a bar, and this shows the other possible Enhancers that can be triggered. The West Coast Spins is activated in the same way as the East Coast Spins and also awards 8 to 10 bonus spins. Here, on each free spin one of the five enhances will be activated and some of these will get locked on the reels. Landing bonus symbols will add more bonus spins and unlock more of the enhancers.

If, during either of the East Coast or West Coast spins, all five of the enhancers are activated, this moves the game to the Coast to Coast Spins feature. It's also possible to activate this by itself if five scatters land on the reels. What this bonus offers is five bonus spins with two enhancers in play. These will land simultaneously on the reels. Finally, there is the NoLimit Bonus feature. This is an option found across all NoLimit City slots. These are Buy options where paying 80x the stake 8 East or West Coast spins can be earned. The other option is to pay 420x the stake to get five bonus scatters on the reels and 12 Coast to Coast bonus spins. Both options increase the RTP of the game to 96.2 and 96.89% respectively.

East Coast vs West Coast is jam-packed full of features. The graphics are fun and engaging, and the soundtrack keeps the mood flowing. The slot starts out with just 243 ways to win, but due to numerous Enhancer features and other bonuses, this can be pushed up to an incredible 84,375 ways to win. Triggering the Coast to Coast feature is the option that provides some of the biggest and best wins, but either of the Coast Spins is also really useful. What also makes this game stand out is the theme — there aren't many slots with a hip hop theme and none as successful in bringing it to players. Finally, this slot game is also compatible with a range of different devices.