Casumo is one of the best places to come for sports betting. It does not matter what your favourite sport is, you can find it on the cards at Casumo along with a wide variety of events and betting sections. Casumo also offers various types of sports from different continents, but for those in the UK the option to bet on football is number one. However, there are also multiple options available for other top sports betting options, which include cricket, horse racing, tennis and every major sports tournament from across the globe. 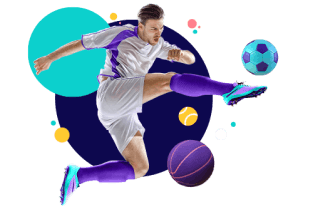 Different Football Leagues and International Tournaments You Can Bet on

When it comes to football sports betting, Casumo has pulled up its socks to give its audience the best experience. Here are some of the best football leagues and international tournaments that give as a user can bet on:

An important aspect of the Premier League is that it stands out completely because of its competitive nature. In most of the domestic leagues, only a few teams have a realistic percentage of winning in this game. That's not the case here though. Each season welcomes several new contenders interested in the game, and there have been different winners over the years.

Next in the English Football League is League One. This is a relatively new league as it was only introduced into the UK football system for the 2004-05 season. Similar to the other football leagues in this country, it's all to play for, with teams able to move up through the ranks when successful.

League Two, like League One, was created in the 2004-05 season. It's the lowest division in the English Football League. There are 24 teams that take part in this league, where each team earns points for a win, loss or draw. The top three teams move up to League One at the end of the season.

Lowest of the five divisions in the UK is the National Football League. This league is also known as the Vanarama League. Just 23 teams take part in this football event but, as with the other divisions, teams can move up to a higher league after a great seasonal performance.

The Spanish game La Liga is probably known to be one of the toughest out of all the European leagues, including the ones like Real Madrid, Barcelona, Seville, Atletico Madrid, and Valencia, which by the way, are all competing for the title. There are so many top-level teams in this League which makes the number of Derby matches quite incredible. There is hardly any week that passes by without two top teams competing against one another.

Bundesliga is a League that is not particularly star-studded as some of the others we have mentioned in the list. However, this does not mean that it does not enjoy a great level of entertainment and respect in the world of soccer. Much like La Liga, Bundesliga is crowded with teams that are matched fairly evenly. Many matches provide a better betting chance to players who understand the ins and outs of the teams involved in the game.

Serie A has become quite effective when it comes to betting scandals over the decades. That is why we would recommend you to be a little careful when you bet on the games here. But, even if there were scandals and match-fixing that occurred in the past, this League remains to be one of the best soccer tournaments that you can bet on. It is known as a top betting League with the defense of soccer not having many goals and chances to bed with many bookies.

This International tournament is meant for club teams. This can be considered as one of the most prestigious club tournaments in the football universe. Teams that participate qualify either by winning the domestic League or by finishing in the top. 32 teams qualified for the group stage, which is split into eight groups consisting of 4 teams each. The winners and the first runners proceed to the next round, where the tournament takes the format of a knockout competition.

Europa League is a more balanced league and also tends to be more tough and unpredictable. This is why they have great odds and some fantastic opportunities to bet, which is really favored by the players who want to capitalize on it.

In the upcoming Euro 2020/1, 24 national teams will participate and play cross 51 matches in 12 cities. The games will be started on Friday, June 11, 2021, in Rome. The tournament will end at the Wembley Stadium, with the finale taking place on Sunday, July 11.

Obviously, the first step of the entire ordeal is to register yourself on the website. This will take barely any time of yours. All Casumo needs is some basic information about your email address, password, mobile number, username, name, gender, pin code, address, and date of birth. Once you agree to the terms and conditions, you are good to begin.

How to Reach the Sportsbook

You can find the Casumo sportsbook on the website, which will have all your favorite sports, leagues, tournaments, and events laid in front of you. Scroll without any hassle and go through the details to know more.

When you look for good football betting games, check out the currency allowed, live betting options, bonuses, and other such details. Casumo also provides live Football, which is highly appreciated by the users. Basically, you can watch and bet on them at the same time.

It allows you to bet on the overall outcome of a game — i.e. whether the game will end in a Home win, Away win, or Draw. With three different outcomes, the odds for this market are not too high, nor too low.

Both Teams To Score

This allows you to bet on whether both teams will score in a given match. As a result, there are only two possible outcomes — Yes or No.

It has three different outcomes, but each of them covers two of the three outcomes of a football match.

In this market, the player places a bet on both the half-time score and the full-time score. Instead of the normal 3 outcomes, we here sit with 9 potential results and this is reflected in the odds-on offer. If you think the match will end with a win to the away team, but be a draw at half-time, you have to place your bet as "x-2".

This market consists of only two outcomes: a Home win or an Away win. If the match results in a draw, your money is returned as if nothing happened.

This line is handicap betting as we all know it, but instead of just offering you the chance to back on either team to come out on top, you can also bet on the handicap draw.

This is the most complicated betting market is the Asian Handicap market, where you bet on what the outcome of the match will be, after accounting for some goal handicap.

In this bet, you need to focus on how many goals will be scored, just in a slightly different way. Instead of betting on whether the total number of goals scored will be over or under a specified total, you’re betting on an exact range of goals to be scored.

Do I need to be an expert in Football to make a bet?

Is Casumo legal for football betting?

Can I get addicted to football gambling?